While it might seem unfair to the mainland ports listed in this article to mention Kona, it would be even more unfair to leave it out. Located on the leeward side of the Big Island of Hawaii, Kona is home to one of the United States’ most prolific blue marlin bites. You can catch blue marlin every month of the year here, and the Kona boys seem to land at least one grander each season. Most of the tournaments take place in the summer months when the billfish bite with more regularity. As far as other species to contend with, you’ll find a seemingly never-ending supply of tuna, wahoo and mahimahi, not to mention striped marlin, shortbill spearfish and the occasional swordfish.  Read the Whole story at Marlin Magazine Online. 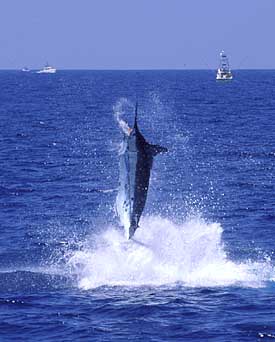