Blue Marlin – Blue Marlin are found worldwide and categorized into two separate species by the International Game Fishing Association; The Atlantic Blue Marlin and The Pacific Blue Marlin. The Blue Marlin is one of the largest fish in the world and can grow to lengths over 14 feet and weigh up to 1,500 pounds or more. These fish are migratory and travel distances of hundreds or thousands of miles along their routes.

The Blue Marlin is known for its speed and strength, and for this reason, they are highly sought after by sport fisherman. Blue Marlin prefer warmer water temperatures above 70 degrees and are typically found farther out in the ocean in water depths of 80 fathoms or deeper (500 feet). Blue marlin feed on a variety of marine life, including small fish like tuna and ballyhoo and squid. Blue Marlin typically feed along the edge of sea mounts, deep water ledges or drop offs where deep water currents create an upwelling and push nutrient rich waters and baitfish closer to the surface.

Blue Marlin can be found year round in Kona due to higher average ocean temperatures in this part of the Pacific and the town of Kona on the Big Island of Hawaii is considered of of the best places in the world to fish for Blue Marlin. Due to Kona’s location on the Big Island of Hawaii, extremely deep water is reachable just a few hundred yards from the harbor entrance. This means short runs to productive fishing and typically calm waters due to the proximity of the fishing grounds to the shoreline. While Blue Marlin fishing in Kona is productive year round, the peak seasons for Blue Marlin in fishing Kona is June through September. 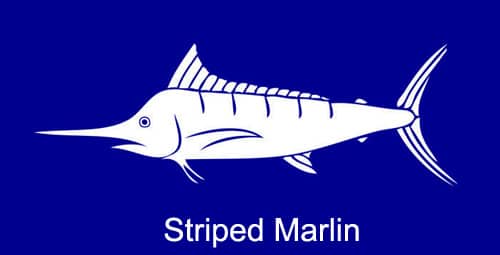 Striped Marlin – The Striped Marlin is a Pacific Species of Billfish found in the Pacific and Indian Oceans. The species can be found from the west coast of the US and Mexico and throughout the Pacific and Indian Oceans. While the Striped Marlin doesn’t grow as large as their cousins the Blue Marlin, they can reach weights of up to 400 pounds in some locations of the world. The species gets its name from the vivid blue and purple vertical stripes on its body that it displayed when feeding. The Striped Marlin in known for its habit of “Tailing”; lurking just under the surface of the water with its tail protruding out of the water during the hunt for small baitfish. This characteristic makes it especially exciting for anglers to sight cast to these fish near the surface.

Striped Marlin are migratory and migrate toward the equator in the winter months of the year and then back toward the northern and southern hemispheres in the warmer months of the year. Striped Marlin many times hunt and feed in schools, and it is not uncommon to catch multiple fish at the same time while trolling. Striped marlin are found in the waters off of Kona, Hawaii during the winter months with the peak season being the months of January through March. 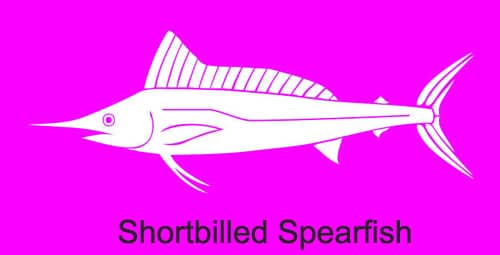 Shortbilled Spearfish – The rarest and smallest of all Billfish species, the Shortbilled Spearfish is found predominantly in the Indian and Pacific oceans. This slender fish typically weighs under 100 pounds, and has a distinctive short bill. This pelagic species feeds on small baitfish like needlefish, flying fish and squid and are targeted using smaller trolling lures or smaller skirted dead baits mixed into the spread when trolling.

The waters off of the Big Island of Hawaii near Kona are one of the best places in the world to find this species of billfish. Due to their tolerance for cooler water temperatures, these fish migrate through the Hawaiian islands during the late fall and into the spring and are highly sought after by light tackle anglers. 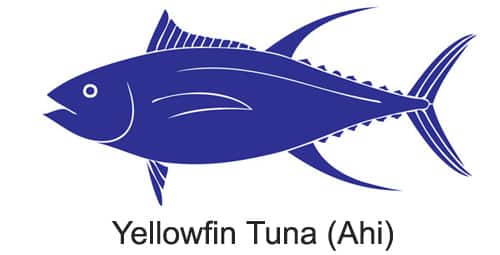 Yellowfin Tuna (Ahi) – The Yellowfin Tune is an epipelagic gamefish found throughout the Atlantic and Pacific Oceans. These fish are known for their strength and speed and put up an excellent fight on rod and reel. These fish spend their time in the upper column of the water where sunlight encourages the growth of plankton. They typically congregate in large schools, hunting and feeding on small baitfish and squid and are frequently found following schools of porpoise.

Yellowfin tuna can be caught trolling artificial lures, and slow trolling small live baitfish. When the fish are aggressively feeding in schools, pitching live rigged baits to the fish is especially effective. Fishing for Yellowfin Tuna in Hawaii is good from May through September, with the most productive months being the warmer summer months of June, July and August. Yellowfin Tuna are frequently caught incidentally when trolling lures for Blue Marlin and other billfish species. Yellowfin can grow to over 400 pounds, but typically range between 100 and 250 pounds in the waters off Kona Hawaii. These fish are prized for their rich, fatty red flesh and can be served as Sashimi, sushi or rare grilled filets. 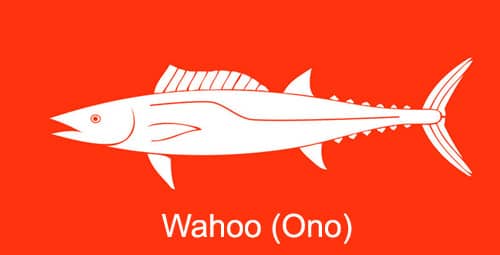 Wahoo (Ono) – The Wahoo is a slender fish of the scombrid or the mackerel family found in the tropical and sub-tropical ocean regions. In Hawaii, the Wahoo is also referred to as Ono. These fish are prized for their delicious, flaky white to gray flesh that is excellent for grilling. This mild tasting fish can be found throughout the Pacific, southern Atlantic and Caribbean. The wahoo is one of the fastest fish in the ocean and can reach speeds of up to 60 miles per hour. They typically grow to a size of about 175 pounds, but are more typically caught in Hawaii in the range of 100 pounds or less.

In Hawaii, these fish can be caught relatively close to shore, which makes it a great species to target for anglers wanting to fish a little closer to shore and who want to take home some filets for the grill. Ono are caught using trolling lures, plugs and swim baits and are very aggressive. They have very sharp teeth, and because of their speed, can make blistering runs when caught on rod and reel. For this reason, they are one of the prized sport fish targeted in the Hawaiian Islands. Wahoo are migratory in nature and begin to show up in Hawaii in the late Spring. Typically, the peak season in Kona is from the full moon in May through the end of September, but you can expect incidental catches well into the fall months depending on water temperatures. 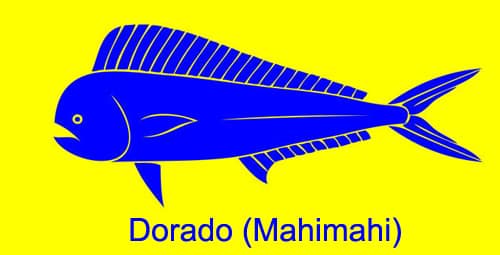 Dorado (Mahimahi) – Dorado or Dolphin Fish, also referred to as Mahimahi in Hawaii, can be found throughout the tropical, sub-tropical and temperate ocean regions of the world. Mahimahi are one of the most prized game fish and know for their delicate, mild flavored filets. One of the fasted growing fish in the ocean, these fish are plentiful throughout the world. As such, Mahimahi are constantly on the hunt for food. They school in large numbers and feed on small baitfish, needlefish, flying fish and squid.

Mahimahi are known to congregate around floating structure or debris offshore which makes them particularly easy to target when debris is present. Once hooked, they put on an acrobatic show and are extremely sporting to fight on rod and reel. They range in color from bright yellow to green to vivid blue when excited and can grow to 60 pounds or more. Mahimahi are typically found together or in large schools which makes hookups a common experience. Mahimahi can be found year round in Hawaii, although he Winter months of December through April bring the best concentrations of these fish through the Hawaiian Islands.