An angler tags and releases her first blue marlin on a half day fishing charter in Kona Hawaii on board the Humdinger. Captain Jeff Fay and deck hand Henry “Butch” Chee Jr. work together as a team to bring the big blue marlin to the leader and successfully tag and release the anglers first blue marlin. 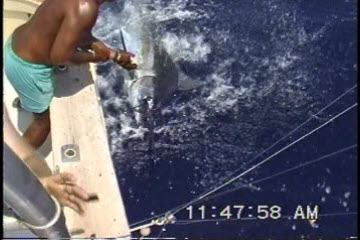