In an August 26, 2010 article by Charles Levine posted on MarlinMag.com, the author details the top sportfishing destination world wide with the highest probability of catching a “Grander” (a blue marlin over 1,000 lbs).  What makes Kona an ideal location is that it sits in the middle of the pacific ocean and the waters off of Kona remain protected by the huge volcanoes that created the Big Island of Hawaii.  Fishing in Kona Hawaii is close to the shore with most fish caught within five miles of land and the waters most every day are very calm and deep (500 to 1,000 fathoms within 5-10 miles of land), making it an ideal location for tourists and vacationers to try their luck at catching a big blue marlin.

“You can catch a grander Pacific blue on any day of the week in these waters, but the best big-fish months occur during the summer. Jim Rizzuto, who has chronicled the local fishing scene for the past few decades, counts 76 marlin topping 1,000 pounds since 1960 (and that does not take into account any granders released).

The Big Island is literally the top of a mountain that drops down to the seafloor. The depths fall away to 1,000 fathoms within sight of land, and you can catch marlin, tuna, wahoo and more within a stone’s throw of the harbor. It’s not uncommon to see an 18-foot Boston Whaler trolling with a 130-pound setup. The average blue runs between 300 and 500 pounds, but most of the fleet sticks with heavy tackle — and for good reason.

Capt. Jeff Fay, who runs Humdinger, a gorgeous 37 Rybovich, says he prefers baits for the big ones. Fay knows what he’s talking about. He’s won the Henry Chee captains award in the Hawaiian International Billfish Tournament four times — the most of any captain.”

CLICK HERE to read the whole article on Marlin Magazine, the authority on Blue Marlin. 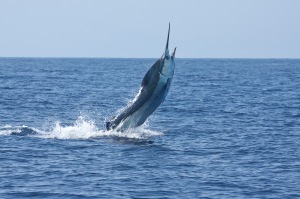