Kona, Hawaii – July 11, 2011 – The crew of the Humdinger, Captain Jeff Fay, and Deckhands Henry “Butch” Chee Jr. and Brett Fay along with Anglers Jim Humphries and Eldon Lee went on to win top honors in the total points and most tags categories in Kona Tournament Series Skins Marlin Derby held in Kona July 8-10, 2011.

The Humdinger Sportfishing team made a strong showing in day one of the tournament tagging three fish for a total of 600 points, but Heather Masunaga fishing on the Rod Bender landed a 676.5 lb blue marlin in the closing minutes of the first day to take the lead in points and capture the SKIN for day one.

Keeping up the pace of day one, the crew of the Humdinger went on to tag two more fish on the second day of the tournament, but Jim Rainey fishing on the Maui Jim weighed the only fish on day two, a 506 pound blue marlin, that was just enough to take the SKIN for the day.  Despite not weighing a fish, the Crew of Humdinger Sportfishing lead the tournament in total points with five tags and 1,000 points at the end of day two.

The fishing stayed red hot on the Grounds during day three, but the Humdinger struggled to connect on a big fish.  Hooking and losing a nice fish on day three just added to the crew’s frustration, but with such a strong showing on the first two days, the Humdinger hung on to win the total points category and the skin for day three as well, taking home $38,000 in prize money. 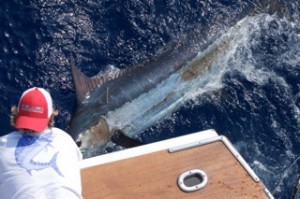