John Wilson of Placerville California caught this nice blue marlin estimated at 500 lbs on his first Hawaii fishing charter in Kona Hawaii.  The marlin exploded onto the short bait and put up a spectacular fight, taking line and jumping several times during the fight.  Captain Jeff Fay navigated the Humdinger perfectly, allowing deck hand Henry “Butch” Chee to bring the big fish along side for  clean tag and release. 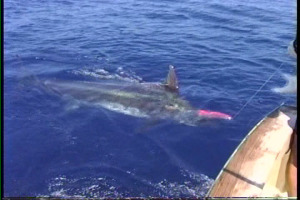