Even Small Marlin Put on a Good Show

Even Small Marlin Put on a Good Show

Lou Getman of Newport Beach CA tags and releases a small blue marlin; his third fish in as many days, on a recent Hawaii fishing charter Kona Hawaii.  The Blue marlin hit a handmade Henry Chee Straight Runner lure made by the Humdinger’s deckhand himself, Henry “Butch” Chee Jr.  The marlin put on a great show, jumping several times before being tagged and released. 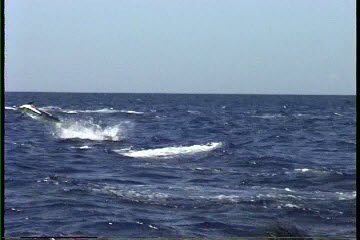 My wife and I spent the morning with Capt Jeff Fay and his son, Brett. We both had a fabulous time, we each caught a Blue Marlin (150lb & 275lb). Brett was fantastic, showing us how to use the equipment and what to expect when we had a fish on the line. It was both of our first times sportfishing and we would definitely choose Humdinger again for our next excursion. Thanks so much for making a memorable day that we will both remember for a lifetime.