Fishing in Kona Hawaii Produces Big Fish in May

Fishing in Kona Hawaii Produces Big Fish in May

Hawaii Fishing Report for Kona – May 2011

Kona Hawaii once again produced strong numbers of Blue marlin and big fish for anglers during the month of May.  According to the Charter Desk, the Sportfishing Charter Fleet in Kona reported a total of 24 Ahi (Yellowfin) Tuna, 41 Blue Marlin (13 tagged), 1 sailfish, 26 Shortbilled Spearfish (14 tagged) and 3 Striped Marlin.  May started off the peak Summer fishing season strong with 3 Blue Marlin over 500 pounds, 6 over 600 pounds, 2 over 700 pounds and one fish just a few pounds shy of the Grander mark weighing in at 995.5 pounds.   Additionally, 8 Blue Marlin were tagged and released with an estimated weight over 500 pounds with the largest being estimated at 750 pounds.

Be sure and book your SportFishing Charters in Kona Hawaii early as dates fill up quickly during the peak summer fishing months.  Call Captain Jeff Fay at (808) 325-3449 or on his cell at (808) 936-3034 or EMAIL US to check availability.  Also, check out our Tournaments Page to learn about all the blue marlin sportfishing tournaments in Kona Hawaii. 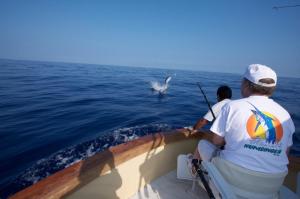 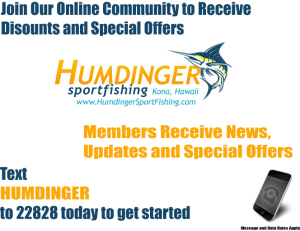 Captain Jeff and Brett were great! We are seasoned anglers and can tell a top notch operation when we see it and they for sure are! We were able to hook up 2 marlins during our trip and it was just a great experience. We will be back again and for sure will be booking another trip with the humdinger crew!