On a recent Kona fishing charter on board the Humdinger with Captain Jeff Fay and deckhand Henry Chee Jr., Dr. Kevin Hogan tags and release one of three blue marlin he caught on the first day of a three day fishing charter.  The blue marlin in this video stayed down and fought hard right up the wire. 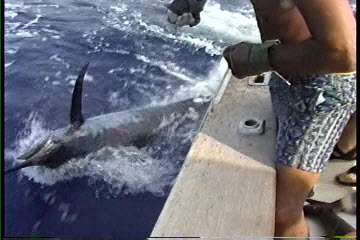