Kona Fishing Report for June 2011 – The fishing remained red hot in Kona during the month of June as the peak summer sportfishing season got into full swing.  During the month of June, the Kona charter boat fleet saw great action for anglers fishing off the Kona Coast with strong numbers of Ahi (yellowfin) Tuna, Blue Marlin and Shortbilled Spearfish being reported.

According to the Charter Desk, for the month of June the Kona Charter boat fleet reported a total of 100 Blue marlin, with 62 marlin tagged and released and 48 blue marlin weighed in.  The largest three blue marlin for the month of June weighed in at 922.5 lbs, 809.5 lbs, and 745 lbs.  Of the 62 blue marlin tagged and released by charter boats in Kona during June, five blue marlin were estimated at over 500 lbs.  In addition to the great blue marlin fishing this month, 53 Ahi (yellowfin) tuna were weighed in by anglers with the top three fish weighing 206 lbs, 190.5 lbs and 173 lbs.  The Kona charter boat fleet also reported 59 shortbilled spearfish, 4 striped marlin, 1 bigeye tuna and 1 swordfish.

To book your Kona fishing charter on the Humdinger with captain Jeff Fay, call (808) 325-3449 or email us on our Contact Us page. 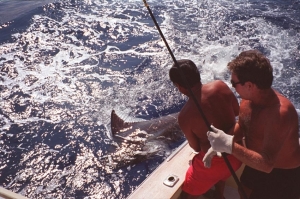