The Kona Sportfishing Charter Boat Fleet wrapped up the month of September with some impressive catches.  According to the Charter Desk in Kona, the Kona Sportfishing Fleet caught a total of 196 Blue marlin during the month of September.  Anglers chose to tag and release 129 blue marlin and weighed 67 fish, the three largest weighing in at 943 pounds, 850 pounds, and 675 pounds.  In addition to the great Blue Marlin Fishing in Kona this past September, anglers caught 24 Ahi Tuna, 1 Pacific Sailfish, 1 Black Marlin and 1 Shortbilled Spearfish.  The three largest Ahi Tuna caught during the month of September in Kona weighed in at 202.5 pounds, 192.5 pounds and 180 pounds respectively.

September is also the month that the Kona Tournaments fishing season wraps up. After winning the Skins Marlin Derby earlier in the year, the crew of the Humdinger went on to secure top honors in the 21st Annual Tag and Release Tournament (TART) in Kona by tagging and releasing 8 Blue Marlin during the five day event.  This is the eighth win in the 21 year history of the Tag and Release Tournament for Captain Jeff Fay and Team Humdinger. 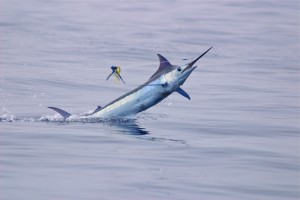