Kona Hawaii – August 2011 – The Kona Sport Fishing Charter Boat fleet had a spectacular August producing over 325 blue marlin for anglers fishing in Kona.  According to the Charter Desk, the Kona charter boat fleet tagged over 250 blue marlin during the month of August and weighed another 67 with three largest marlin weighing in at 980 pounds, 907.5 pounds and 725.5 pounds.  During August, one black marlin was weighed in at 446.5 pounds and 18 short billed spearfish were caught with 12 being tagged and released.  In addition to the great blue marlin fishing in Kona Hawaii in August, 24 Ahi (yellowfin) tuna were caught with the top three fish weighing in at 197.5 pounds, 189 pounds and 164.5 pounds.  Finally, four striped marlin were tagged and released to round out the catches for the month.

The month of August is typically one of the best months in Kona Hawaii for catching blue marlin and tuna.  Kona is host to a number of tag and release fishing tournaments each year, which accounts for the large number of blue marlin tagged and released this past month.  Some of the best months for sport fishing in Kona still remain.  Consistent sportfishing for marlin continues through the months of September and October, so be sure to call today to book your Hawaii fishing charter with us.

Contact Captain Jeff Fay, Humdinger Sportfishing, 808-325-3449 office or 808-936-3034 cell.  You can also visit our website at www.Humdinger Sport Fishing.com to view all the latest Hawaii Fishing Reports, and Kona Fishing Videos.  Be sure to also check out all the other fun things to do on the big island of Hawaii by visiting our Hawaii Tours page at www.HumdingerSportfishing.com/hawaii-tours/. 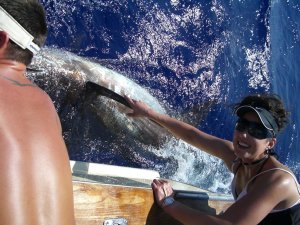