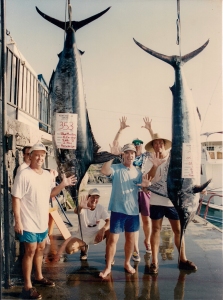 Kona, Hawaii — Team Humdinger, with Capt. Jeff Fay at the helm, won the 14th Annual T.A.R.T (Tag and Release Tournament) last week with one of the most spectacular days of fishing in local history.

“It was like pitching a shutout and hitting a grandslam homerun in the same inning to blow everyone else away, ” said T.A.R.T. sponsor Ken Corday. “In the space of about five hours, the Humdinger notched five blue marlin, including a 730-pounder. I can only remember three Kona boats catching five blue marlin in a single day and Jeff has now done it twice — both times in the T.A.R.T.”

The annual event is a five-boat competition with teams switching boats each day for five days. Prior to its historic last-day bonanza, the Humdinger had gone two weeks without a nibble. Friday, the crew of Fay and Capt. Butch Chee hosted Jerry Scottom, a professional freshwater guide from Bakersfield, California.

Chee brought along the spirit of his dad, and namesake, the legendary Capt. Henry Chee. The late skipper was among Kona’s pioneers and the originator of the plastic billfish trolling lures now in use throughout the world. Butch put two of his dad’s handmade creations from the late 1950’s or early 1960’s into the trolling pattern for the day. The 730-pounder hit a classic black “salt-and-pepper” lure first trolled four decades ago.

“They don’t take those classic lures out too often,” said Corday. “I told Scottom, a newcomer to billfishing, that he had just had the best day of fishing of his life and he had only been marlin fishing for a week.”

The Humdinger hooked its first four on the Keahole “grounds” on a day that looked dead. No bait showed as the boat trolled through areas normally teeming with skipjack tuna. Even when the Humdinger hooked fish after fish, the other boats nearby got nary a bite.

“Fishing is not a great spectator sport, but this was wonderful to watch,” said Corday. “The other ten or fifteen boats around Jeff became an audience. There he goes again!

“After he left the grounds flying four flags, we heard the camera boat announce his fifth marlin just like it was a ball game,” Corday said. “Over the radio we heard, “the Humdinger is hooked again and there is another one out of the ball park.””

Competing teams weighed three marlin and released and tagged five. In addition to the three tagged by the Humdinger, the Ihu Nui (Capt. McGrew Rice) and Pacific Blue (Capt. Bill Casey) each tagged one. The Chiripa (Capt. Bill Crawford) caught a 398, to add to the 730 and 237 on the Humdinger. The Northern Lights (Capt. Kevin Nakamaru) rounded out the field with the Huntress (Capt. Randy Parker) as press boat. “We had three or four other nice fish come off,” Corday said.

“Jeff has won the T.A.R.T five times in fourteen years, usually on the last day,” Corday said. “Three times, he won it in the last half hour of competition. He also caught five blue marlin in one day in T.A.R.T 7, seven years ago when I was the angler.”