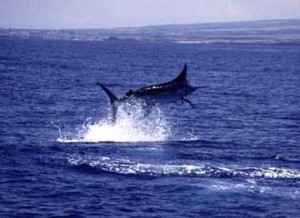 Kona, Hawaii – July 24, 1998  –  The highlight of this year’s tournament actually came during the final hours of the last day. In keeping with the old adage of “saving the best for last”, the veteran crew on board “Humdinger”, a 37′ Rybovich that consistently places in the top of every Hawaiian sportfishing tournament, managed to land a 634 lb. blue marlin that proved to be the largest of the fishing tournament. And, to make their victory even sweeter, it all happened within 18 minutes of “Humdinger” leaving the dock to make its final run of the tournament. That’s all it took for “Humdinger” to capture 1st Place Overall and bank over $34,000 in prize money.

The tournament began with Walter Hester’s team on “Maui Jim” tagging and releasing the only marlin caught or tagged during Day One.

Day Two saw “Maui Jim” take advantage of Day One’s momentum by boating a 550.5 lb. marlin. Later that morning, Steve Schumacher tagged a Marlin from his “Kila Kila” and Jeff Smith tagged one from his “Pamela”. Finally, in the afternoon, defending champion, skipper Tim Hicks, led angler Al Sullivan to a hookup with a 348 lb. marlin while on board “Illusions”. At the end of Day Two, the “Maui Jim” had earned $20,340 in daily prize money and the team on “Illusions” had received $19,800.

On Day Three, Ross Kraemer on board “Layla” started the morning off with a tag and release, but later “Kila Kila’s” Jason Holtz tagged the second marlin of the tournament and locked up the $5,000 for the most marlin tagged and released in the tournament.

Also, during the final day, Mike House of Honolulu reeled in a 428.5 lb. blue marlin from Maui’s “Start Me Up” with owner/skipper Doug Armfield at the helm. This fish held on to 3rd Place and received $17,190 in daily money as well.

However, before the day was out, world-famous Capt. Jeff Fay, refusing to be outdone by skippers from out-of-town, pulled a lunker out from hiding that was to rearrange the leader board for the final tally. Washington angler Joe Sewell wrestled with his 634 lb. marlin long enough to bring the leader within the grasp of veteran wireman Henry “Butch” Chee who iced the largest marlin of the tournament and gave the “Humdinger” team 1st Place Overall.

The Big Island Invitational features an entry format that allows for the base entry fee proceeds to support prize money for the top three point-tallying boats, as well as $5,000 for both the top tag and release boat and the team with the largest marlin of the event.

The 13th Big Island Invitational Marlin Tournament was the second competition in the 5-stop tour making up the Kona Marlin Tournament Series. Still unclaimed is a pair of brand new Caterpillar diesel engines, a special prize guaranteed by Pacific Machinery of Honolulu and reserved for the team catching the largest marlin of the Series weighing over 898 lbs.

The Kona Marlin Tournament Series awarded more than $340,000 in prize money in 1998. Organizers expect more than $400,000 in total awards in 1999. The next event on the circuit will be the 12th Annual Firecracker Open on the Fourth of July Weekend, followed immediately by the 7th Skins Marlin Derby in back-to-back weekends.