Fishing in March continued to reward anglers fishing out of Kona with good numbers of Blue Marlin and Spearfish.  Kona continued to demonstrate that it is the best place in the world to test your luck at catching a 1,000 lb blue marlin.  According to the Charter Desk, the three largest fish weighed in by the charter fleet tipped scales at 1,062 lbs, 978.5 lbs and 821lbs respectively.  In total, anglers weighed 16 blue marlin and tagged another 29 blue marlin during the month of March.

Hawaii fishing starts to turn on in the late Spring and into the summer with the Spearfish showing up in big numbers first.  The annual Shortbilled Spearfish migration continued strong as Kona Charter boats produced 54 spearfish for anglers and tagged another 27.  Additionally, the charter fleet out of Kona caught 14 Ahi Tuna, 2 Black Marlin, 1 Sailfish, 2 White Oceanic Tuna and 115 striped marlin. 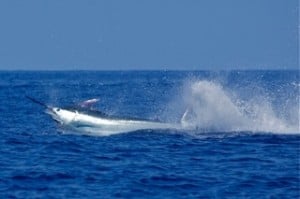