Kona, Hawaii fishing report – Update June 2011 – The second week of June turned red hot in Kona with a number of big fish being reported.  On June 8th, three fish over 700 pounds were caught and the following day on June 9th a 983 pound marlin and another one that went 901 pounds came to the leader.  Most of the fish were caught just outside of the harbor or in front of town.  On June 9th, Captain Jeff Fay and the crew of the Humdinger missed a marlin estimated at 200+ that hit a lure while trolling on a half day charter.  Prospects continue strong through the full moon on the 15th of the month. 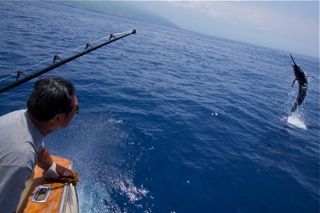