Fishing Hawaii for Blue Marlin – Up Close, Personal and Near Shore

Fishing Hawaii for Blue Marlin – Up Close, Personal and Near Shore 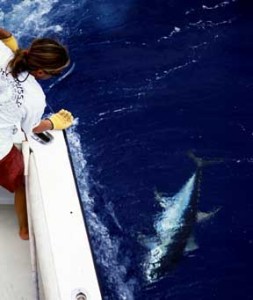 I glanced off the stern and the waving palms were barely 1/2-mile away, framing the volcanic mountain backdrop of Mount Hualalai behind the town of Kailua Kona, and behind that towered 13,677-foot-high Mauna Loa Mountain, one of the largest single mountain masses in the world.

And here I was, fishing in Hawaii in some of the most famed blue marlin water in the world–only 10 minutes from port! This was my kind of fishing, and I loved it. No multi-hour cruises just to get to the fishing grounds, no big swells or rough seas. Here, fishing out of Kona, Hawaii, it’s a simple 10-minute cruise to the fishing grounds, you’re never out of sight of land, and you’re fishing some of the most prolific blue marlin waters in the world.

I had never heard of such a thing until friend John Wilson of Placerville told me about his experience out of Kona on the “Big Island” of Hawaii just weeks before. A friend of his, Jeff Dickey out of Houston, fishes on the Humdinger regularly, a 37-foot Rybovich, and wanted John to come over and experience the blue marlin fishing firsthand.

Their first day of fishing was good, with two marlin of 167 and 172 pounds caught, but the next day was the “real fun” one, Wilson related.

“Allison was up for the first fish,” said Wilson, “and at 9:30, after the banana dance, we hooked up with something big and it sounded. The fish never came back up, and Allison cranked and cranked and cranked–close to an hour. It was a beautiful calm, flat day, and then up came this 350-pound blue. We tagged and released it.”

The second fish that day was a big, big blue marlin, and it was my friend John’s turn at the rod. The fish came up and took the bait and was hundreds of yards behind the boat before the boat was in full reverse and on its way backing down on the fish. Then the big fish went straight down and Wilson began cranking.

After a long battle, the huge blue marlin came straight out of the water entirely on the opposite side of the boat from where Wilson was fighting it! It cleared the water completely and threw spray everywhere when it landed. They eventually brought the blue marlin alongside, tagged it and released it. That fish was estimated to be 750 pounds and about 12 feet long end to end, and 10 feet “short measurement.”

“That was one of best trips I’ve ever been on–four blue marlin in two days with a little helicopter touring and some golf in between,” he said. “You’ve got to be on the water for 3 or 4 days to have a good chance of getting a blue, but you begin fishing only100 yards out of the dock in beautiful water that’s calm and close to shore.”

Well, that was enough to get me excited, so at Dickey’s invitation I booked a flight and flew over to Kona, where I stayed at the King Kamehameha Motel in Kona. What a trip! Fishing each morning in calm, fish-filled water and touring the island the rest of the time. And talk about food! There’s a huge array of things to eat on the boat, and evening meals were to dream about.

We caught some huge bull dorado, called Mahi-Mahi here in Hawaii, some yellowfin tuna and saw half a dozen big blues caught around us. It just wasn’t my day for the marlin, but we had a great time catching the bull dolphin and tuna.

One of the beautiful things about fishing over here in Hawaii is that no matter what time you want to get away on a Hawaiian vacation you will find good fishing out of Kona, and blue marlin are available year-round. On Super bowl Sunday one vessel captured a 1,218-pound blue marlin, currently the 6th largest fish on record and bumped captain Butch Chee of the Humdinger from the number 6 to number 7 position with his 1195-pound fish.

Captain Jeff Fay and Captain Butch Chee man the Humdinger, and they have over 3 decades of experience fishing these waters. They’re the only 3-time winners of the Hawaiian International Billfish Tournament‘s Henry Chee Award (yes, Chee’s dad, guess where he learned to fish?) and they have scored more total Hawaiian fishing tournament points than anyone in the history of the Hawaiian International Billfish tournament.