During the winter months in Kona, Striped Marlin show up in good numbers and it’s not uncommon to catch multiple fish on your full or half day Hawaii fishing charter.  Striped Marlin don’t get as big as their cousin the Blue Marlin,  but they can put up a good fight and a great show jumping and making fast long runs.  This little Striped Marlin puts on a good shows and never stops jumping all the way up to the boat.  For more information on booking your Hawaii Fishing Charter on the Humdinger, call Captain Jeff Fay today at (800) 926-2374. 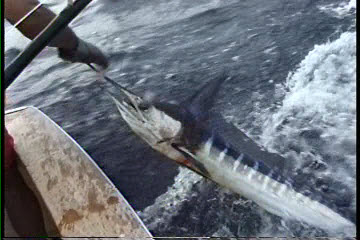