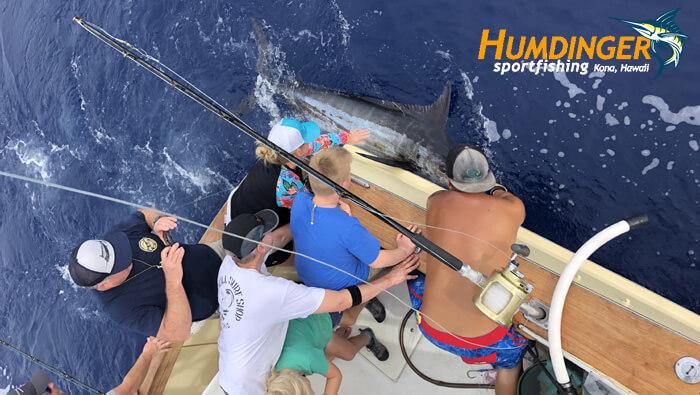 Kona Fishing Report – March 2017 – The Big Island of Hawaii – The fishing in Kona was a bit up and down during the month of March due to a series of spring storms that moved over the Hawaiian Islands. This is a pretty typical weather pattern for this type of year, with winter storms moving down for the Bering Sea and through the islands. When the trade winds and currents were good, the fishing was good. This time of year, we catch a good variety of species including Blue Marlin, Striped Marlin, Shortbilled Spearfish, Ono (Wahoo), Mahimahi (Dorado) and the occasional Ahi (Yellowfin Tuna).

During March, some large Blue Marlin showed up. We were lucky enough to tag and release two nice fish over 500 pounds during the past month. One fish went about 500 pounds and the second we estimated at 650 pounds. Several other boats also released fish in the 600-700 pound class and one boat reported breaking off a Blue Marlin they called over 1,000 pounds.

In addition to some better than average Blue Marlin action, the Mahimahi started to show up more consistently. We had several charters this past month where we caught multiple fish for clients and we caught a few really nice Bulls as well. We also started to see better numbers of Ono showing up. The Ono migration through the Hawaiian islands usually peaks around the full moon in May, so expect the action for these great eating fish to improve in the coming weeks and months.

Scroll through the photo album below to see some of the other catches this past month on the Humdinger. Be sure to like and follow our Facebook page where we post real-time catches from our fishing charters. Here you can see all the photos and videos of the action right in our Facebook feed. Just go to https://facebook.com/humdingersportfishing

If you are planning a trip to Hawaii this year, and would like to book a fishing charter on the Humdinger, book your charter right from the calendar on our homepage to get our lowest rates and to see our current availability. 1/2 Day Kona Fishing Charters start at just $399 for 1-6 Passengers. One price books the entire boat and we are happy to have you keep the edible fish on your charters. We encourage the tag & release of Blue Marlin whenever possible.

We hope to see you in Kona this year!