The fishing in Kona this last week has picked up quite a bit.  Earlier in the week, we went 4 for 4 one day and 1 for 3 the next day, catching our charter’s younger son a few nice fish.  His expression in the photos below pretty much says it all.  In addition to a good bite happening on Mahi Mahi’s, the Shortnose Spearfish are still around in very good numbers, as well as reliable numbers of Striped Marlin.  As is typical for January and early February, there always seems to be a few really big Blue marlin caught, and this past week was no exception.  Jim Rizzuto’s 16 year old grandson, fishing on another charter boat, connected with his first Grander and after a brutal 30 minute battle, the fish succommed to the fight and could not be revived. 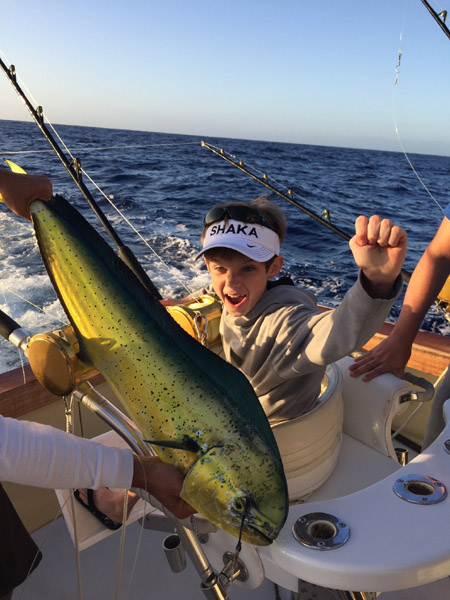 When they made it back to the dock, the fish tipped the scales at 1,058 pounds proving once again why Kona is one of the best places in the world to catch giant Blue Marlin just about any day of the year.  In addition to the great marlin fishing in Kona, there are still a few good schools of Yellowfin (Ahi) Tuna showing up from time to time and the Humpback whales are still ever-present and guests can enjoy watching them breach in distance to pass the time between bites.  For information and special fishing charter packages in Kona Hawaii, Contact Captain Jeff Fay at (808) 936-3034.